One of the types of heat exchangers used to cool fluids is called air cooler. In this type excess heat of a fluid can be transferred to the air to reduce its temperature to the required extent. Industrial air conditioners are used in various industries such as oil, gas, petrochemical and etc.

High temperature fluid, such as hot oil, enters the air conditioner and loses its heat with the help of air flow and its temperature decreases to the desired point.

The components of the air conditioner include the following:

The fan is responsible for creating the air flow, which is in fact the cooling fluid in the air cooler. The dimensions of the fans used in industrial air coolers are in the range of 1 to 8 meters and usually have 4 to 10 blades. To maximize the efficiency of the air cooler, the fan should be such that it covers the entire surface of the bundle tube, and of course the angle of the blades is very influential in its operation, so some fans have adjustable blades.

In this type of industrial air cooler fans are located at the bottom of the pipes and create air flow on the pipes.

On the other hand, the biggest defect of this type is the possibility of hot air return and non-uniformity of air distribution 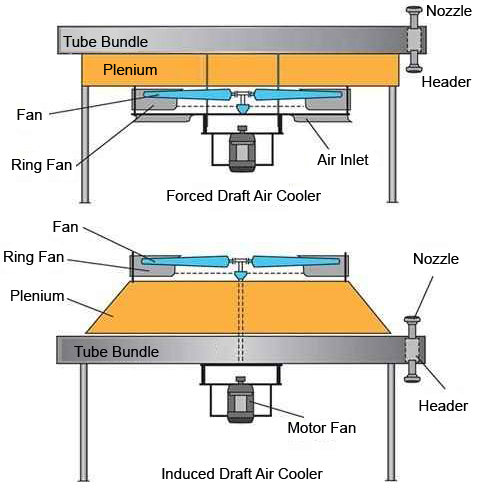 In this type the fans are placed at the top of the pipes and draw the air upwards. This type of air coolers  has a more uniform air distribution.

And its disadvantages are more energy consumption and its temperature limit.

Advantages and disadvantages of air conditioner:

As mentioned, air cooler is one of the equipment that is used to cool fluids, which, like other equipment, has various advantages and disadvantages.